In April 2011 Rosalee visited women's goat and sheep projects near Ouarzazate, Morocco. Here she is with members of Tadoula village project, who have received sheep from The Rosa Association, a group named after Rosalee.

Rosalee Sinn has been at the center of life’s cycle of giving and receiving — love, knowledge, support, expertise and blessings — throughout almost four decades of professional association with Heifer International. [View highlights from Rosalee's journey with Heifer]

Fortunate to have strong female role models as a child growing up in Oklahoma, Rosalee says, she’s always carried with her a vision of a world in which women and men in impoverished communities are empowered with the means to earn a living to support themselves and their families. Working for Heifer International allowed her to see that vision become reality for many, plus gave her a role in making the world a more sustainable, loving, humane place.

“I’ve known Rosalee for more than 15 years and she really reflects Heifer’s values — particularly the cornerstones of sustainability and passing on the gift of self-reliance,” says Ardyth Neill, Heifer Foundation’s President.

In recognition of Rosalee’s long dedication and many contributions to helping the world’s impoverished people, Heifer Foundation’s Trustees Emeriti have bestowed upon Rosalee Sinn the 2011 Dan West Fellow Award.

“Rosalee is a wonderful fit for this award,” Neill says. “She’s devoted her life to improving others’ lives.”

“Rosalee has an indomitable spirit and a sense of the deep values that animate Heifer International,” says Pierre Ferrari, CEO of Heifer International. “She has become a dear friend — as well as a frequent and constructive critic. I take that with thanks as I know Rosalee has a deep affection for all things Heifer. There is no better possible recipient for this award.”

“I am honored to receive the Dan West Fellow Award," says Sinn. "My years of work with Heifer and the opportunity to see Heifer’s partnerships in villages around the world, as well as to know Heifer’s exceptional donors and recipients is a special gift in my life. Frankly, I feel a bit overwhelmed to receive this special honor, yet not without a feeling of thanks for what it means.”

I believe in the beauty of the universe,
Forever redeeming the gift of love in me. from "I Believe" by Rosalee Sinn

Rosalee began working for Heifer in 1965 in Massachusetts, where she still lives with her husband Paul, a retired United Church of Christ minister. Although she had plans to work as a church education leader, she couldn’t say no when asked to become the administrative assistant to Robert Mayhew, Heifer International’s regional director in the Northeast Region. Heifer’s mission dovetailed with her values and goals, and she welcomed the chance to play a role in its efforts to eradicate worldwide poverty and hunger.

Eight years after joining Heifer, she became regional director and relocated the office from Bridgewater to Plymouth, Mass. From this location, Rosalee directed the fundraising and education efforts for Heifer in the New England states and New York. At the time, Heifer was still shipping livestock raised in the United States to countries around the world. Rosalee and her staff were responsible for selecting the 200-400 animals shipped annually from the Northeast Livestock Holding Center, then located in Plympton, Mass. They handled health requirements, proper vaccinations, and air freight arrangements. In 1982-’84, she supervised the building of the Heifer Livestock and Learning Center at Overlook Farm in Rutland, Mass., and moved her office there in October 1984.

“The farm has been a wonderful resource for Heifer,” Rosalee says. “Thousands of people come every year to learn firsthand about the challenges of poverty and hunger facing millions of people around the world. People of all ages learn about animals, global issues and how they can make a difference. Overlook Farm has also served as a training center for Heifer leaders. Chen Taiyong, director of Heifer China, was a trainee at Overlook in 1987. Fu Changxiu, also a trainee, works as deputy director for the Bureau of Animal Husbandry in China and is a member of the Heifer board of directors.”

In 1993, Rosalee considered retiring but instead was recruited by then-Executive Director Jo Luck to work as interim director of development at Heifer International’s headquarters in Little Rock, Arkansas.

“It was extremely rewarding, but a long commute home to Massachusetts every other weekend,” Rosalee says, laughing.

As interim director of development, she helped create Heifer’s first direct-mail program, Read-to-Feed and was involved in the organization’s first professionally produced videos. Rosalee was chairperson of Heifer Hong Kong in its development stages, helping establish the current model that raises more than $4 million annually. She also worked directly with donors as a major gifts officer, then was interim director of the Mid-Atlantic Region.

In 2004, Rosalee actually did retire. She continues her relationship with Heifer as a volunteer, conducting educational programs about the guiding principles and programs plus speaking at universities and other institutions about goat husbandry and Heifer’s development model.

Then There Were Goats…

Although she’s never owned any goats, she learned about raising and caring for animals through her work with Heifer. During her sabbatical in 1980, Rosalee worked on a goat farm in Pasa Robles, Calif., a dairy farm in New Lebanon, Conn., and in Cameroon, West Africa. While teaching goat husbandry courses in Cameroon, Rosalee decided to get her master’s in animal science at the University of Connecticut. The goat courses were the inspiration for the book Raising Goats for Meat and Milk, which she co-authored with veterinarian Paul Rudenberg. She is recognized as an authority on goats, serving as an adviser to the International Goat Association.

While her primary role at Heifer was philanthropy and development, she says, she taught and mentored individual farmers, many of them women. Rosalee also served as a mentor for Beatrice Biira of Uganda, whose achievements make up one of Heifer’s greatest success stories.

“Beatrice has been a very important part of my journey with Heifer,” Rosalee says.
Biira’s family prospered and she realized her dream of attending school after her family received a goat from Heifer International. Recently, 15 years after her family received a goat, Beatrice joined Heifer’s staff as the Community Engagement Officer in New York City.

“Rosalee is very loving, very warm,” says Biira, who met her mentor in 1996 when Rosalee visited her village during a Heifer International study tour. Rosalee has visited Heifer work in 28 countries and led dozens of study tours throughout the world, sometimes accompanied by her husband, children or grandchildren.

“Just in Rosalee’s presence, you can feel the love of a mother, a friend — someone who is very, very caring,” 27-year-old Biira says. “She took the personal initiative to help me here on my journey to the United States, to help me with the transition. She helped me through everything — school, career, making decisions.”

Biira says she considers Rosalee’s family to be hers, explaining that she has lived with Rosalee and Paul since arriving in the United States after graduating from high school in Uganda. “Without thinking, when I say I am going home, I mean Rosalee’s. That is home to me.”

A Life Based on Love

Biira is among countless women and men who have benefitted from the love and concern for which Rosalee is well known. A co-founder of WiLD, Women in Livestock Development, Rosalee has helped women around the world realize their full potential. 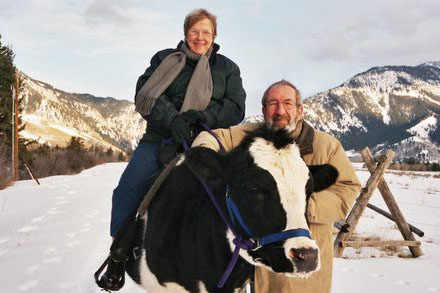 Rosalee and her husband Paul in Jackson Hole, WY on their 49th anniversary

Closer to home, Rosalee has been an inspiration to her four children and six grandchildren, among them 21-year-old Bethany Sinn, who is studying social work at Elizabethtown College in Pennsylvania. Bethany says she plans to someday serve in the Peace Corps or perhaps follow in her grandmother’s footsteps at Heifer International.

“I definitely believe my desire to help others has come from my grandmother,” Bethany Sinn says. “When I was 15 years old, she took me on a study tour in Vietnam and Cambodia that exposed me to the hardships of others, the work that Heifer does and all the effort my grandmother puts into the organization. Her deep belief in helping others has shaped who I am and greatly affected my life. When I heard she won the Dan West award, I was really proud of her.”

While others speak admiringly of Rosalee’s contributions to Heifer, she prefers to talk about Heifer’s positive impact on the lives of people around the world — donors, volunteers, staff and beneficiaries of Heifer as well as her own.

“When I think of that cycle of giving and receiving and Heifer’s cornerstone of passing on the gift, well, you can take that in a lot of different ways. We may be giving people expertise, training, animals and all the resources that come from those things, but we’re also giving them our friendship,” Rosalee says. “In return, we are becoming better global citizens and better individuals.”

Throughout his life and as Heifer International’s founder, Dan West was committed to helping the poor, hungry and marginalized people. His vision continues to guide Heifer International and speaks to the simplest and most basic principle of charity – helping people help themselves.

In West’s honor, Heifer Foundation — a separate nonprofit organization that grows and oversees the endowment for Heifer International — established the Dan West Fellow Award to recognize those who have given of themselves to help the less fortunate of the world. Each year, the Foundation’s Trustees Emeriti choose one outstanding leader as a Dan West Fellow.